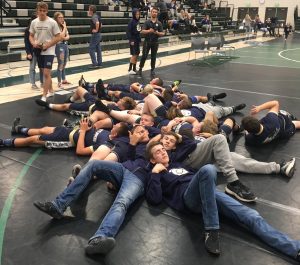 Westlake Thunder took an early lead against Skyridge during our season opening dual meet. Skyridge proved to be a formidable foe after defeating Westlake 50-15 in last year’s dual. According to Beehive Rankings which ranks all schools in the entire state; for the 2018-2019 season, Skyridge received #16 and Westlake #23. At 120 lbs, Westlake freshman Tucker Butler beat Skyridge’s Jayden Adamson who placed 2nd at the 5A state tournament last year. Junior Calvin Bishop lost a close match against his opponent at 132 lbs who was a 4th place finisher at the 5A state tournament. Senior Gabe Stastny fought all three periods in his grueling match at 170 lbs. Stastny finished with an arm bar and far wrist pinning combination for the fall. Afterward, Gabe declared that it felt “fantastic” to help Westlake to a 46-31 upset victory over Skyridge.
Corner Canyon put up a tough fight with some close matches. Despite Corner Canyon having an early lead, Westlake Thunder produced a commanding victory over Corner Canyon 55-15. Some of the notable victories against Corner Canyon came from Trent Taylor, Eli Dansie and Yijath Torbay.

No Events This Week

Events are added by athletic staff.
View All Events